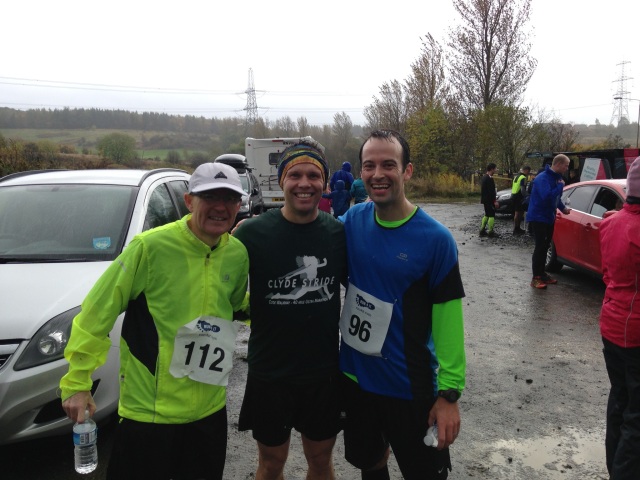 The Antonine Trail Race is a favourite of mine. Yes, I am biased because it starts at my front and traverses trails and paths I run regularly, but also, it is a damn fine race.

2014 saw the 3rd running of the event and its popularity is increasing year on year, so much so it was the subject of much mirth at the SUMS awards the previous evening when Ian Beattie was called out for having to miss the race due to the night out.

I, of course, was at the SUMS night and managed a few pints (and a 2am get-to-bed-time after a nightcap at home); which is surely ideal preparation for a race? Not so for my drinking buddy Gerry Craig who DNS’d due to, ahem, illness.

I regularly host recce runs on the route for newbies as it is a quirky wee test. It was great to see so many of the runners I’d recce’d with this year and all of them did amazingly well. Good people, each and every one of them.

Also, I’d managed to talk David Gow – who brought with him Bob Steele – in to doing the race. We are talking a couple of exceptionally good ultra runners there. It was going to be a test to keep with them.

After injury at Glenmore I was running strong again, but it was in the back of my mind that this race was only 6 weeks earlier and the legs might not like the intense effort of running hard for 14 miles.

Conditions on the start line were awful. Heavy rain and wind overnight had continued into the morning and at the pre-race briefing we huddled together under a gazebo to stay out of the elements. Most were in good spirits about the race ahead. Trail runners tend to embrace these kind of conditions and it was just as well as unbeknown to us, there was a few water obstacles on the course.

I hoped to be in the top ten and under 1:40. The previous two years I had finished 8th in 1:48 and 7th in 1:41. Until I had checked the results for the previous year I’d have sworn I was 5th! The old brain is getting out of whack I tell you.

I lined up in the front row for the start and bang! off we went. Right away, Neil Renault, who would crush the CR with a win in 1:27 was away like he was shot out of a cannon. After the first mile my watch beeped at 6:01 and I was a good 30 seconds behind Neil and going FAR TOO FAST!

I slowed it down and settled into about 7th place through mile two. I had Bob Steele on my shoulder for the first few miles as we ran towards the trail linking Coach Road and Stirling Road. I love this picture below from Phil Hunter. Shows the majesty of trail running, and has Croy Hill dominating the background. 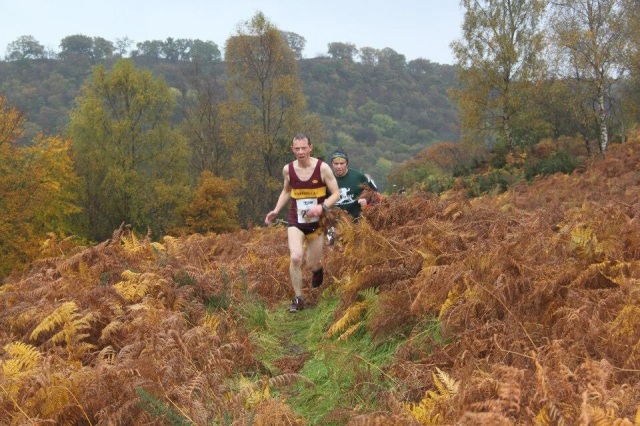 That’s me in Clydestride t-shirt.

By the time we’d got through the trails and then crossed Kilsyth I was in 5th place. As the race headed to halfway through Drumbreck Marsh, we went to cross a couple of the Garrell Burn bridges only to find the water knee deep for about 100 yards. That fair freshened the legs up! I laughed all the way through. Love that shit!

I overtook Del who was in 5th place as we headed up onto the towpath at Twechar, keeping him right on the quirks of this section and under the canal viaduct.

Then, the hills. I took it easy up Creecy Wood Hill and then went hard down the hill to Croy to make up some time. I was keen to see how close to 3rd I was. Thankfully I was feeling good and the gel I took at 8 miles had kicked in. So, with only a few miles to go I redoubled my efforts. 3rd place was halfway up Croy Hill as I passed through the gate, but simply put, I couldn’t close the gap and by the time I got to the top of the hill, slip on my arse and all, I was all about maintaining 4th place.

The run back was pleasant until I climbed the two snidey bastard hills (see route preview for more info) and the wind struck. It was gale force into the runner’s face. At least that is how it felt and most runner’s I spoke to afterwards said the same.

Nonetheless, I carried on into the finished and was amazed to see I had crossed the line in 1:35:33 – 6 mins quicker than the previous year. It seems Guinness is truly good for you!

I was absolutely delighted with that effort. In previous years this would comfortably made the podium but the increasing popularity and awareness of the race means that it is now attracting more, and better, runners. That’s only a good thing.

Big mention for two of my close running buddies. Alan McCuish who beat 1:50 by 3 seconds and to John Kirkwood who took his PR on the course down by over 10 minutes. Awesome running. Also, David and Bob finished 6th and 7th, showing good form over the trails. I hope they come back next year.

As for the winners, a stunning run by Neil Renault who apparently could have gone faster and is a 64 min half marathon runner. In the ladies race Hannah Devey won in 1:48. A superb time.

Well done to both.

Now, a word for the organisers and marshalls. They were awesome. Every helped who stood and clapped and cheered and encouraged in those conditions needs to be applauded. Stop reading for a minute and do that please.

Lastly, RD Robert Sanderson is learning all the time. This year was the best yet. The course was marked superbly well and the race pack was excellent. I like my ATR tech tee. Kudos to you and your team Robert, and I will see you next year.