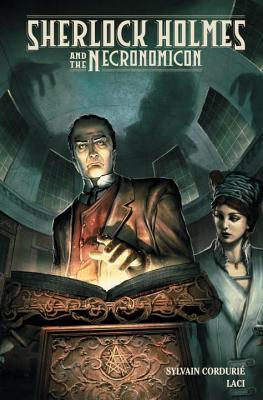 Holmes and Lovecraft, that’s a cool pairing. Like Rene and Renato, or Wurzel and Aunt Sally.

In this ambitious graphic novel, Sylvain Cordurié and Laci combine to bring us beautifully drawn yet sadly unfulfilling story.

The artwork is tremendous, more Lovecraft than Doyle in its feel. The drawings of places like the Crystal Palace and London’s streets are really well done and capture the Victorian era beautifully. In fact, the drawing of Victoria Regina herself is one of the highlights.

The story pitches Holmes back against his old, and thought dead foe, Moriarty. Yet, there is nothing much of either of them in the narrative at all.

We see little of Holmes’s deductive reasoning, or Moriarty’s web of influence. The latter has turned vampire and the former has been compelled to return from his sabbatical post Reichenbach, thus ending the adventures of Sigerson.

Instead, it is as if the detective and the professor have been added as side-characters to a wider story and are merely there to sell it. Like putting a superstar on a movie poster only to find that they appear in just a small part of the film.

That’s not to say it is a bad yarn, in its own right it is fine but as a Holmes and Lovecraft crossover it feels like in an attempt not to give bias to either it ends up not satisfying either in the end. It is somewhere in between both monsters of literature but is neither; not a good place to be for such a project.