4 weeks ago I did the Glasgow 3k on the Green race, the monthly lunchtime jaunt in Glasgow’s largest park (I think) which is a great wee initiative and gives a monthly fillip to charity. You rock up and pay £2 and you are in.

So, once again myself and Darren Russell got up from our desks and headed over to Glasgow Green for the 12:30 start. Last time I did this I was 5th in 10:33. Today’s conditions were much tougher. A howling wind, a harbinger of snow, was into the runners’ faces for the first mile, but of course behind it coming back.

The race starts at the arch on the west of Glasgow Green and follows the Clyde hugging road east before turning and coming back from whence you came, with the finish at the white boathouse near the west side entry. A map of the course is here.

Today’s race came on the back of a tough week. The D33 ultra on Saturday has been followed by about 22 miles running on heavy legs, including a brisk 6 miler yesterday. I was hoping to get round without having to slow too bad.

Things went much better than I expected. Despite the heavy legs and unfavourable conditions I decided to go for it. I ran the first mile within myself and at the turning point I was in 4th place. The mile time was 5:51 and considering the wind I was pleased with that, I didn’t feel as if my lungs were on fire. That’s a good sign, My legs weren’t springing along but it was ok.

I overtook 3rd place and a first ever podium was on. I could feel the pace starting to hurt about 500m out and I was being chased down (by Mark Alexander according to the results) and I had to dig deep. Pushing as hard as I could, I held off Mark for 3rd place and a time of 10:38. Pleasingly, the pace for the second mile (0.86 of it) was 16s quicker than the first. I’d managed to step it up and hold it.

Greg Hastie was the only person who broke 10 mins and took the race in 09:54. Margaret Hutchinson was first female in 13:24, 23s behind Darren who improved his finish from Feb by a massive 13 places.

Despite being 5 seconds slower than last time, all of which can be attributed to the conditions I feel, this was a really pleasing run. I was able to maintain a good pace despite a heavy week’s running and managed to hold off a challenge to take 3rd place. Maybe one day, if the fast runners don’t turn up, I could win this.

If you want to find out more about this nice wee race go to: http://www.3konthegreen.com 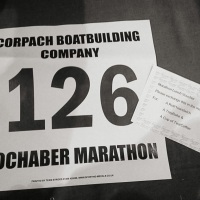